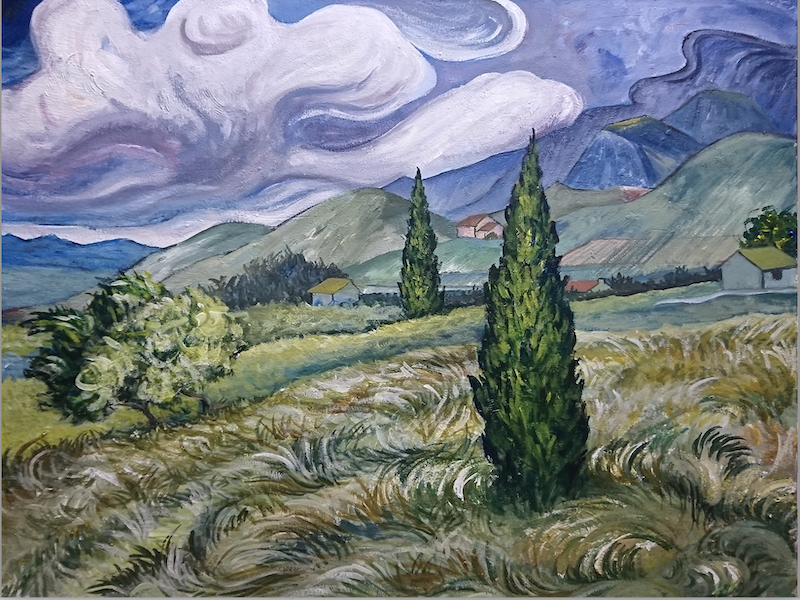 The Smiling Meadows is a low-lying oil-based landscape that depicts nature as a grandiose and solitary force. The sweeping scape incorporates purposeful and forceful brushstrokes that evoke a strong sense of movement. The artists understanding of movement is further illustrated in the cursive and swirling clouds at the helm of the canvas. The movement in the piece alludes to the majesty and ferocity that exists within nature. The power and dominance of nature over the modest dwellings scattered throughout the panorama is apparent. The man-made structures we see are mute in comparison to the nature that surrounds them. The use of color is rooted in pigments of blue, green, and yellow that come to life against the textured, oil-infused paint championed by the artist. The multi-hued sky that crowns the landscape and the wisping foliage in the foreground inspire an untamed aura around the painting that is both intriguing and audible.

I once stumbled upon a meadow that looked like it belonged in a fairy tale. The noises, scents, and tastes were incredible. The sky over the meadow provided a visual feast. It extended as far as the eye could see in a cocktail-blue dome punctuated by fluffy clouds. In a dance of life and death, squeaking swallows pursued whirring dragonflies. A neon-blue river raced through the meadow’s heart. As I approached, a flock of yolk-yellow ducklings scattered from beneath my feet, crashing into the water. The river sang softly as it plinked and tinkled across the gravel bank. Above the sound of the river, the melody of the meadow filled my ears: the dawn chorus, buzzing midges, and the wind whispering. I could smell the cherry blossoms’ sweetness and the gentle caramel perfume of flowers in the air. It was so relaxing that I leaned my head on a mossy rock and dozed off. As I walked home, the first stars began to appear in the night sky. They appeared to have been tossed into the air and caught by a black blanket. I swore I would return to this meadow, a sliver of lost heaven, someday.